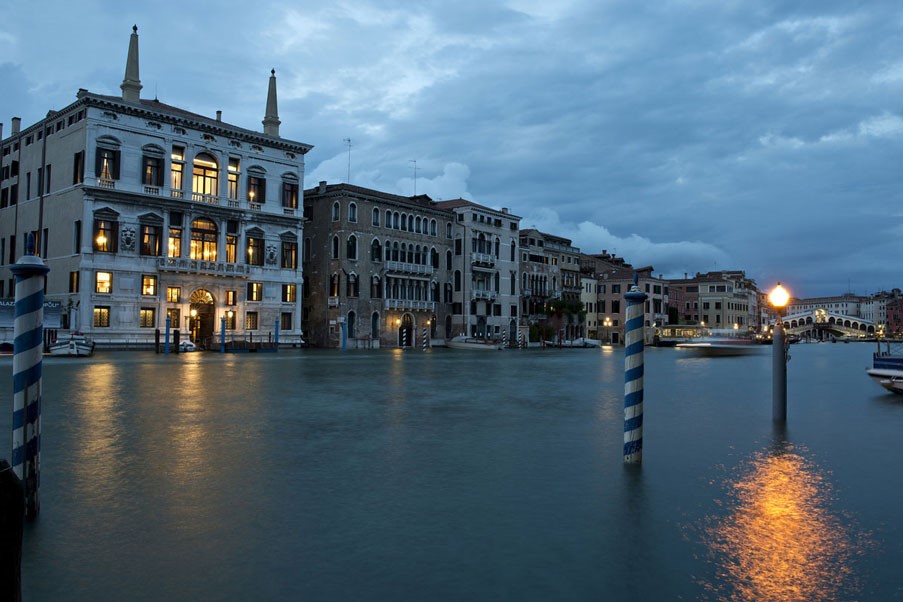 The first European hotel to be opened by Aman, the Canal Grande Venice remains loyal to the Aman ethos of ensuring that it remains true to its surroundings. The 16th century building which is now home to the hotel is the former Palazzo Papadopoli, which was named after the Greek family who owned the building in the 19th century. As you enter the hotel be prepared to be wowed! The walls and ceilings are adorned by original frescos and the floors are chequered marble.

A dramatic grand staircase leads up to ‘Piano Nobile’ - traditionally the grandest floor of a Palazzo, and it has certainly remained impressive. A row of stunning Murano glass chandeliers glisten in the light that beams in from the windows which overlook the Grand Canal below. The Piano Nobile - now a gorgeous lounge area, was originally designed by none other than Michelangelo Guggenheim. In fact throughout the hotel it seems that at every turn you are greeted by original, sumptuous furnishings which have been mixed with stylish touches – almost a modern day masterpiece in itself.

The hotel is home to just 24 suites, giving it an almost boutique feel. Most suites overlook the Grand Canal and there are five signature suites including the stunning Alcova Tiepolo suite, which has its own Chinese painted sitting room and an ornate ceiling by Giovanni Battista Tiepolo – one of the greatest decorative painters of the 18th century Europe.

The thing that we love about the Aman Canal Grande is that the hotel doesn't just elate you with its grandeur, it surprises you in other ways, such as containing two beautifully secluded gardens, and there is a traditional ‘altana’ roof terrace on the fifth floor which offers a unique view point of the city. However perhaps one of the most surprising facts is that the top floor apartments are home to the palazzo’s owner – Count Giberto Arrivabene. It was agreed that he would lease the building to Aman on the condition that he would still call it home, and you are most likely to see him during your stay.

The Aman Canal Grande has two restaurants; Naoki which offers alfresco Japanese cuisine in the hotel gardens during the summer months. The yellow dining room - which incidentally is home to a magnificent fireplace, serves a refreshing mix of Italian and Asian fare.

The location of the hotel means that you can easily access Venice and the mostly Venetian staff will be more than happy to help you plan to make the most of your stay in this most fabulous and enchanting city, to find out more make an enquiry.