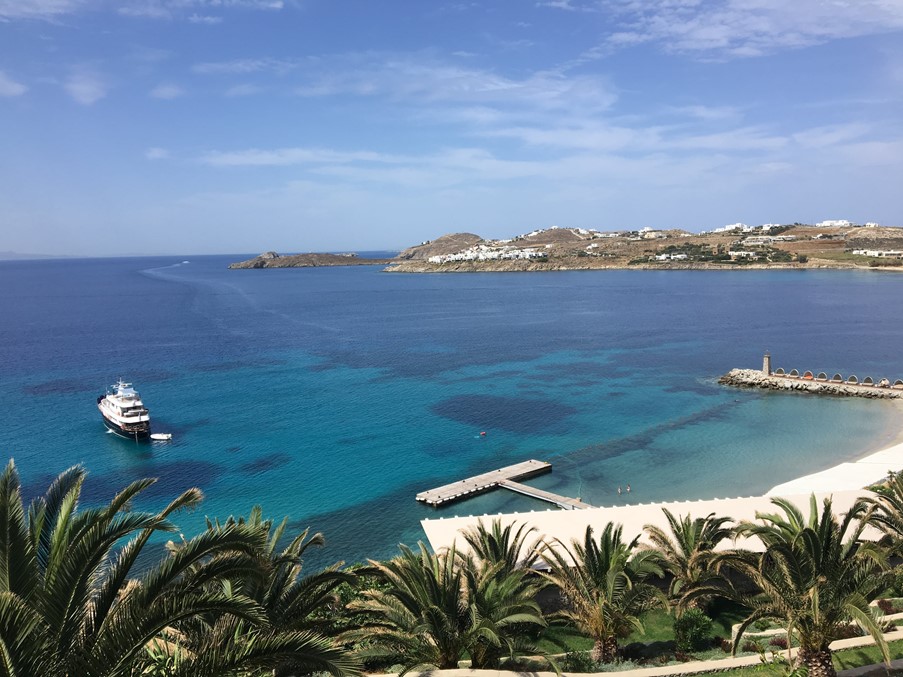 Mykonos has always been on my list of dream places to visit so when the opportunity came up to go and “test” out some hotels and villas I couldn’t say no.

A few weeks later I was leaving behind the grey skies of London for the bright blue skies of Mykonos.  A mere three and half hours flying time (with fantastic connections from London and Manchester with EasyJet and BA) it really couldn’t have been easier to get to and when I glanced out of the plane window and saw the many bays, islands and turquoise sea I knew I was not going to be disappointed.

First stop was the Mykonian Collection.  This group of nine hotels was started by George Daktylides and his four sons who were born and brought up on the island.   Their passion not only for the hospitality industry but even more so the destination could really be felt as one by one they greeted us at their properties.  The hotels were dotted around the island in three different locations and it soon became very clear that each hotel was designed with a different guest in mind – those wanting lots of privacy (their amazing Villa Collection offered the most wonderful private villas you could dream of), those wanting to be close to the beach (the Ambassador was just a few steps from Platis Gialos and an array of wonderful beach clubs) and of course those that wanted to party (they have three hotels on the outskirts of Mykonos Town so you are a stone’s throw from the action). 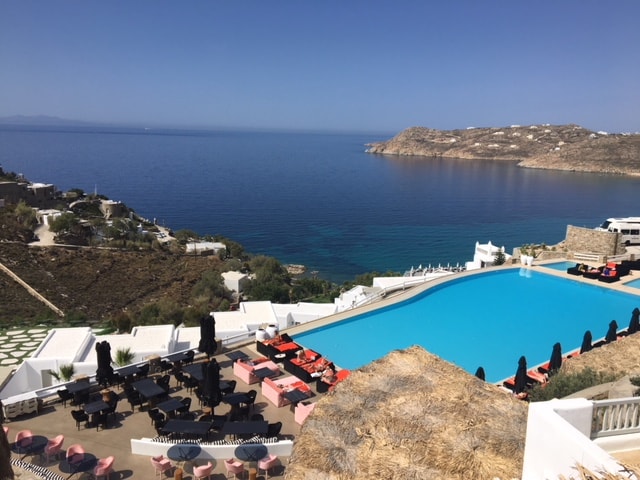 Mykonos is of course well known for its party and nightlife scene and beach clubs such as Nammos and Scorpios had been mentioned to me several times before going.  I did visit them (for those keen to experience these clubs the Mykonos Blu hotel is excellently located between the two) and they were amazing.  I was however surprised (and delighted!) to see another side of the island that was equally as present – the cultural and historical side.

During our time in Mykonos we were fortunate enough to visit the nearby island of Delos, a fascinating archaeological site which due to its close proximity to Mykonos brought its first visitors several decades ago.  The mythological birthplace of Apollo and port during the 1st millennium B.C. it was a captivating tour.   Our guide Amarillys really brought the place alive and it was easy to transport yourselves back in time to when the island was bursting with people…. And we were the only ones there!  It was an extremely memorable visit and one I would recommend to all going to Mykonos.  On the way back from Delos we also stopped for a swim, directly from the boat and were fortunate enough to see dolphins swimming in the distance.

Following a few days visiting the Mykonian Collection we headed to the Santa Marina Resort in Ornos.  Certainly one of the best resorts on the island,  it was great to see somewhere that was suited to adults and children alike.  Families are not always welcomed in Mykonos but the Santa Marina was different and children played happily alongside adults sipping cocktails on beautiful sun loungers.  The two large pools (one adult only) and a private beach meant that there was plenty of space for everyone.  The accommodation, dining (the resort is home to the Buddha Bar) and brand new spa were next to none and I would certainly have no problem recommending this lovely property to anyone planning a holiday in Mykonos. 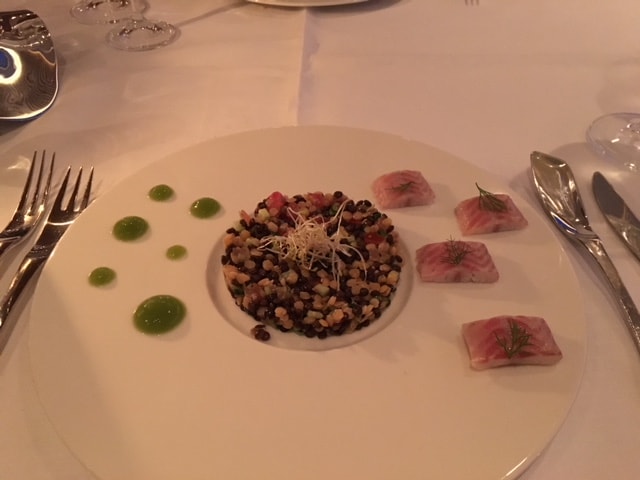 On my last few days I visited several more hotels,  Bill & Coo - a relaxed and low key hideaway on the western peninsular, Mykonos Grace - perfect for those looking for peace and quiet, but only a few minutes’ drive from Mykonos Town and Mykonos Blu - the party hotel, as well as some spectacular villas.

Any finally the villas.  There are a large number of villas for rental in Mykonos and they vary hugely, however due to the style of the island (and the strict building regulations) it is difficult to find one that is not beautiful on the outside and in.  One thing that really blew me away in each property that I visited were the views.  This emphasised that the most important thing about villas are the terraces and pool areas.  Somewhere to enjoy a lovely lunch or drink in the evening.  Fortunately most have the most stunning outside space. 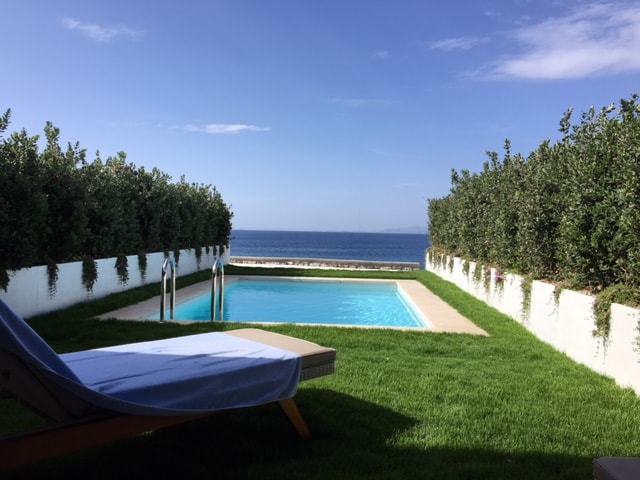 All in all Mykonos totally lived up to expectation and is a great choice for those looking to party, relax and even spend time with their children.