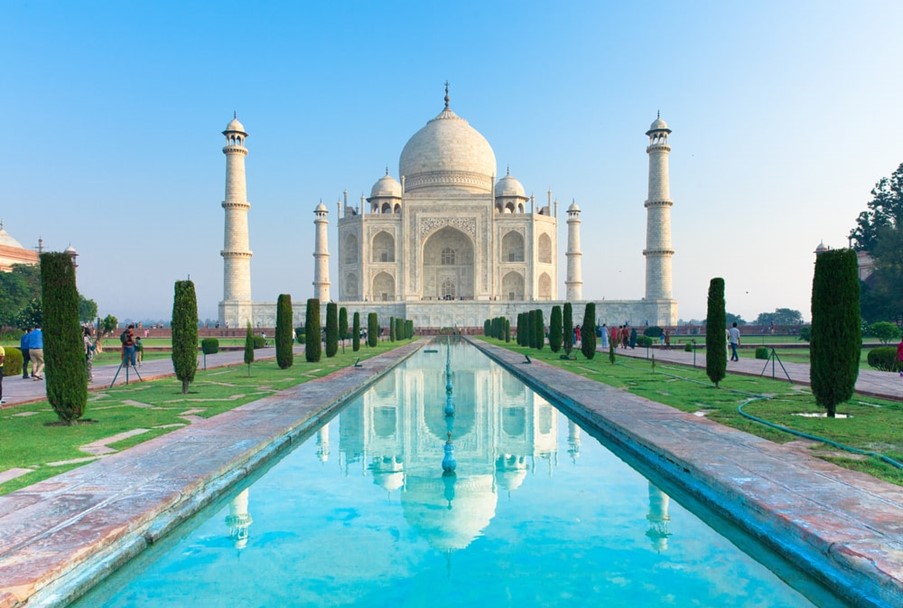 India is a feast for all types of traveller thanks to its diverse landscape of intriguing culture, bustling cities, spiritual towns, picturesque valleys and breath-taking mountain views. With so much to see and do during your trip, we have tried to narrow down some of our favourite experiences during our recent visit to North India.

The capital city of Delhi is home to some 16 million people, making it the third largest city in India. Its strategic location has provided the perfect base for invading armies over the years, many of which left behind monuments meaning you can now look back over the remnants from the past empires as you drive through the city.

Pulsing with energy and colour, Old Delhi is laced by a maze of narrow lanes best explored by tuk tuk. Dodging through the crowds you will experience the full sights, sounds and aromas indicative of the Indian sub-continent.

No trip to Delhi would be complete without a visit to the Gurudwara Bangla Sahib, the temple of the Sikhs. It can be spotted from afar thanks to its recognisable golden dome and tall flagpole standing proud above the surrounding buildings. In addition to the temple itself, look inside the associated community kitchen where it is considered a privilege to assist in cooking and serving food to pilgrims, the economically challenged or visitors. This particular community kitchen is said to feed up to 10,000 people a day! 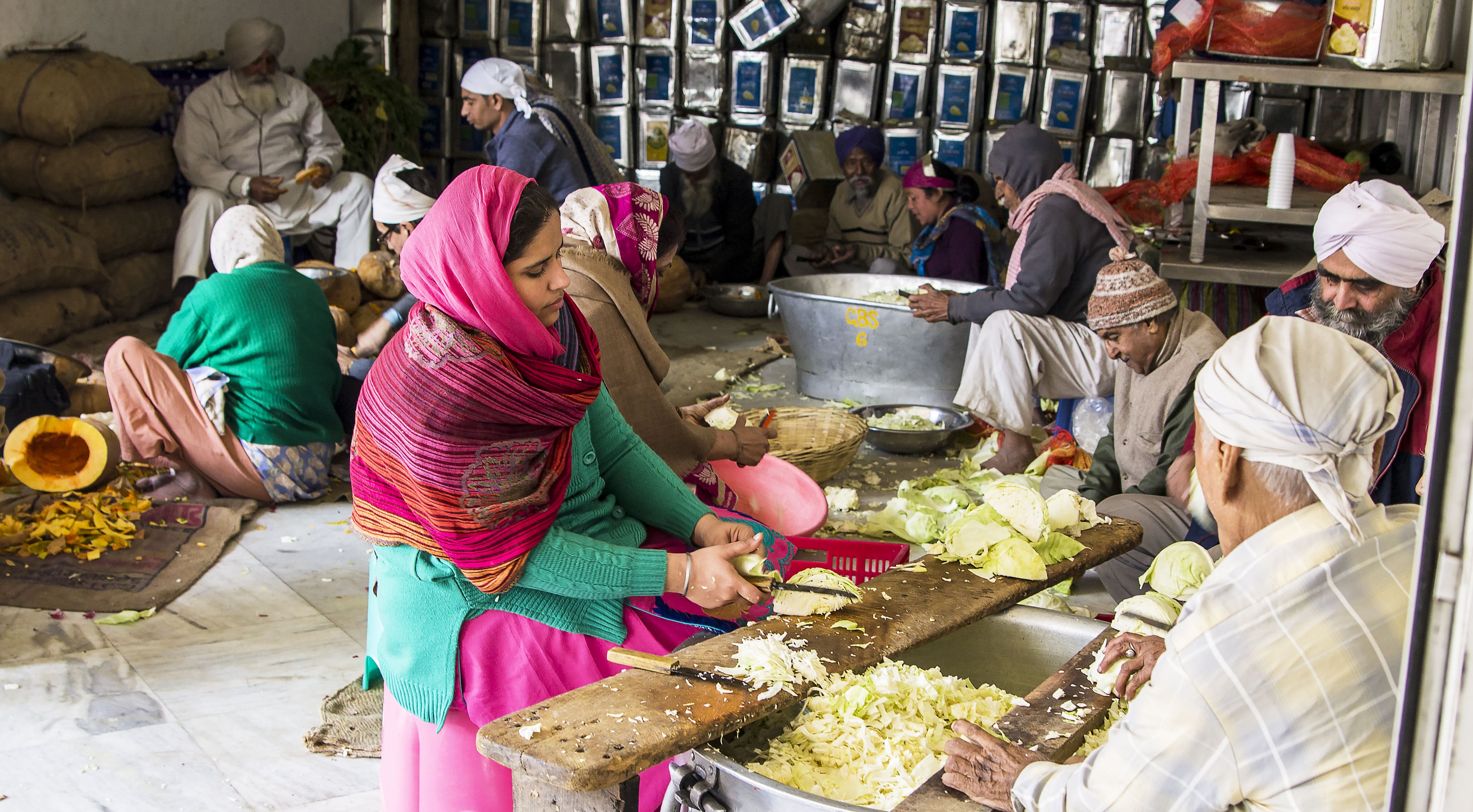 Our second stop took us to Agra, most famously known for the Taj Mahal. The Taj Mahal is at its most spectacular at sunrise or sunset when the light dances on the marble of the tomb and the reflection in the stillness of the water perfectly frames the building in all its glory. Despite heavy rain during our visit, the Taj Mahal was still magical, and the weather allowed for uninterrupted photos whilst the crowds sheltered from the storm. The masterpiece you see today took no less than 22 years to build with a workforce of 20,000 men and has held the world awe struck ever since. 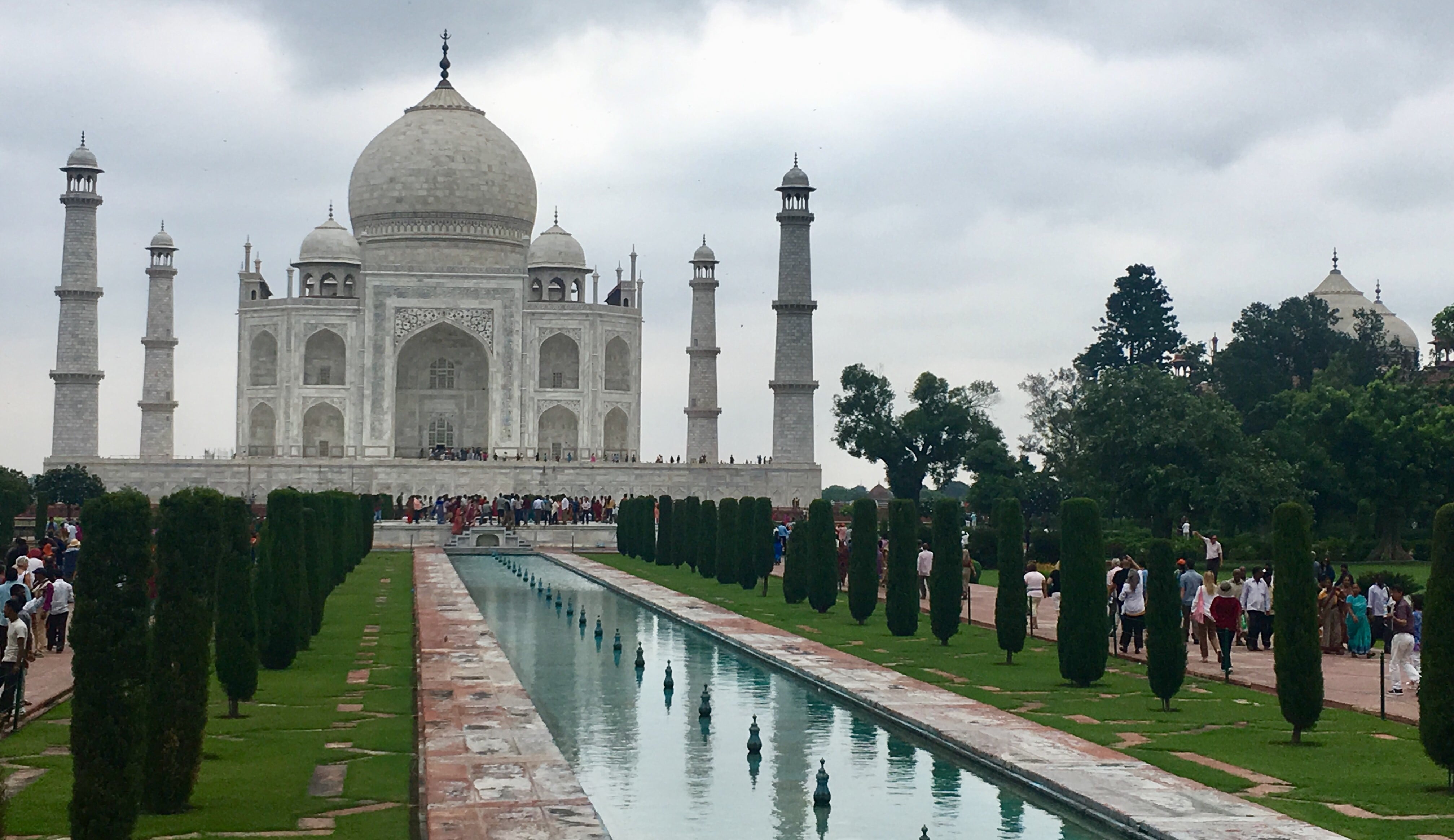 Jaipur is the capital and largest city of the Indian state of Rajasthan. It completes the Golden Triangle tourist circuit alongside its sisters Delhi and Agra. It is also known as the ‘Pink City’ due to its abundance of terracotta buildings, originally painted to honour visits from Prince Edward, followed by the Prince of Wales.

The principle tourist attraction in Jaipur is Amer Fort; known for its artistic Hindu style, this impressive building overlooks Maota Lake which is the main water source for the palace. Located high on a hill, elephants still carry visitors up to the main palace through its unusually high gateways to accommodate for such traditions.

A short drive from the city you will find Dera Amer, a private estate where a local family have rescued elephants from ferrying tourists to and from Amer Fort. Although just a stone’s throw from the city, embrace the countryside whilst bathing the elephants and enjoying a meal under the stars surrounding a giant camp fire. After a busy day, we wound down for the evening inside the ‘Steam’ bar, named perfectly for its location within a restored steam train in the grounds of the Taj Rambagh Palace. 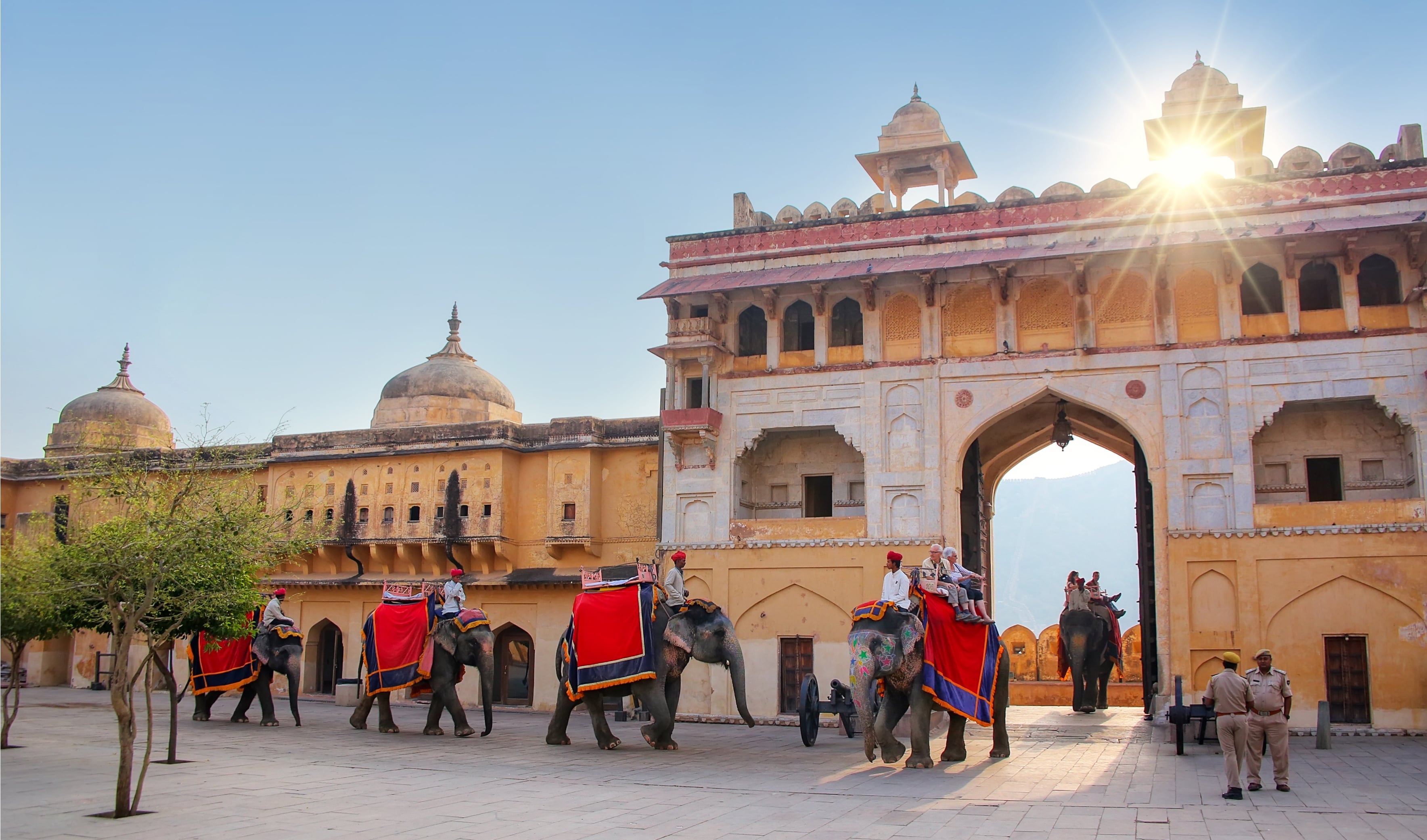 Throughout our trip we experienced the unrivalled Indian hospitality first hand, with the most spectacular of welcomes coming from the Umaid Bhawan Palace. On arrival we were showered with colourful petals as we walked up the stairs to the atrium for a showcase of traditional musicians and dancers.

Jodhpur, also referred to as ‘blue city’ is situated under the centuries-old protection of Mehrangarh Fort. This area of the city was primarily inhabited by Brahmins or the highest castes of Hinduism who chose to add a bit of Indigo while colouring their houses, although the exact reason for choosing blue is not known. Whilst in Jodhpur, we took a private evening tour of the fort, experiencing the spectacular building and its incredible sunset view over the horizon of the ‘Blue City’. 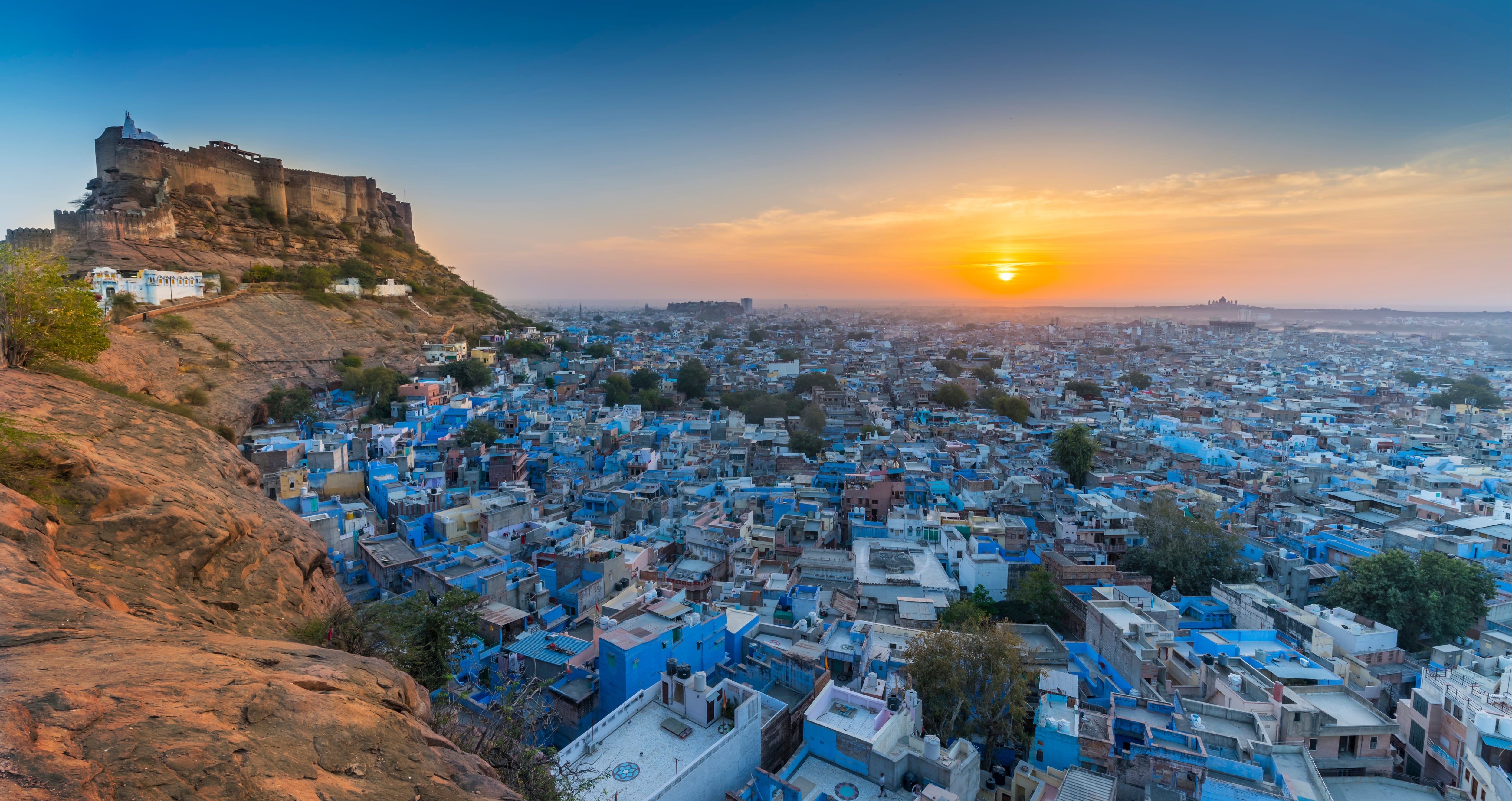 The final stop of our North India tour saw us arrive at Udaipur, also known as the ‘City of Lakes’. Often thought of as the most romantic spot on the continent of India, it is a popular tourist destination full of history, culture and an abundance of scenic locations. Udaipur’s City Palace was by far our favourite of the trip, towering over the lake it is the largest palace in Rajasthan.

Take a tour of the Crystal Gallery which houses the largest private collection of crystal in the world. Established by Maharana Sajjan Singh, who ordered the crystal collection from England in 1877 but sadly died before it’s arrival, leaving them boxed for 110 years! Today, the extravagant collection includes crystal chairs, sofas, tables and even hair brushes.

The Taj Lake Palace provided the perfect backdrop for our final evening in India, sailing around the hotel on their boat whilst dancers and musicians performed on one of the palace terraces. This boating experience is available to book for engagements, birthdays or anniversaries to provide an extra special moment during your trip. 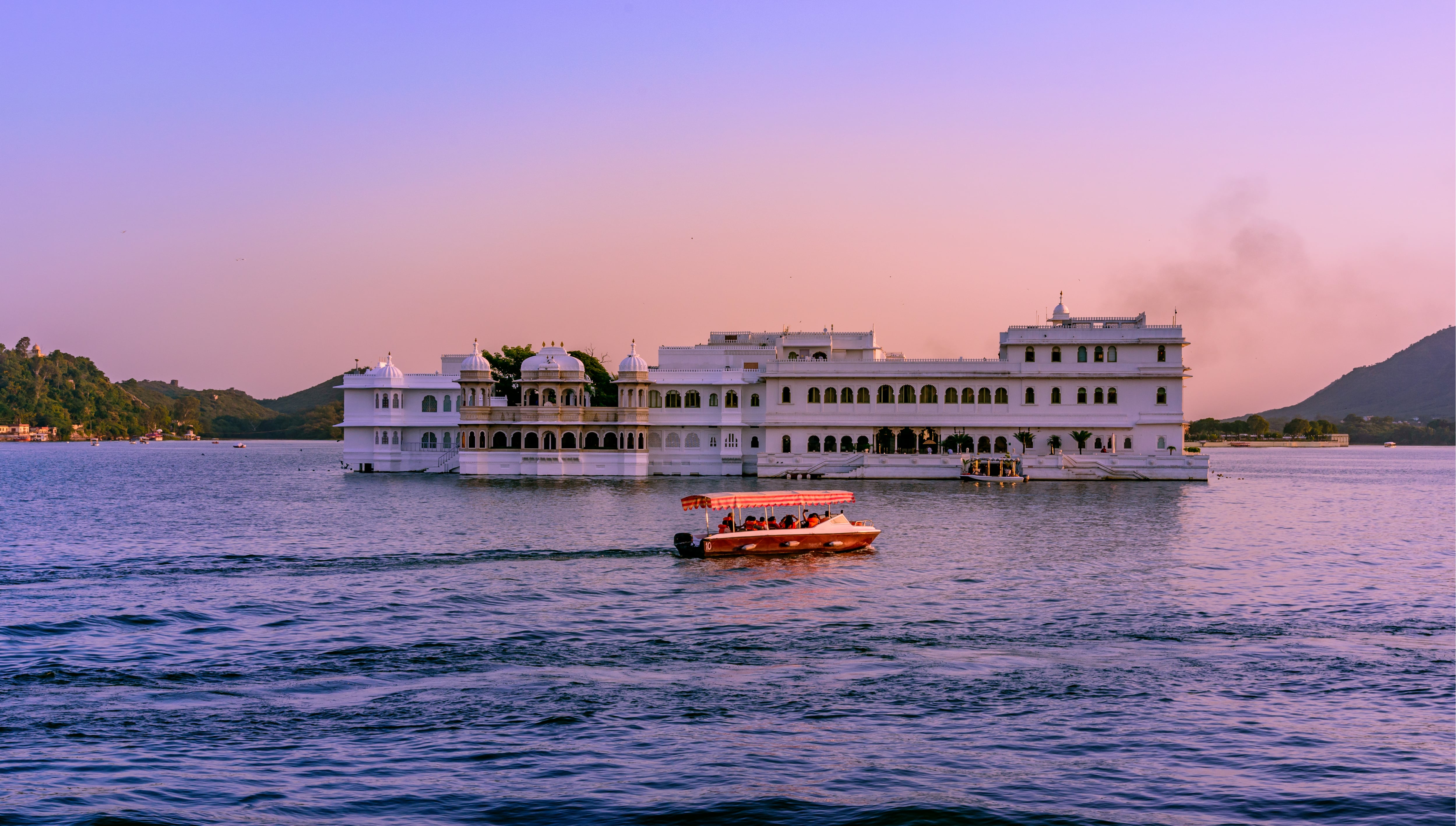